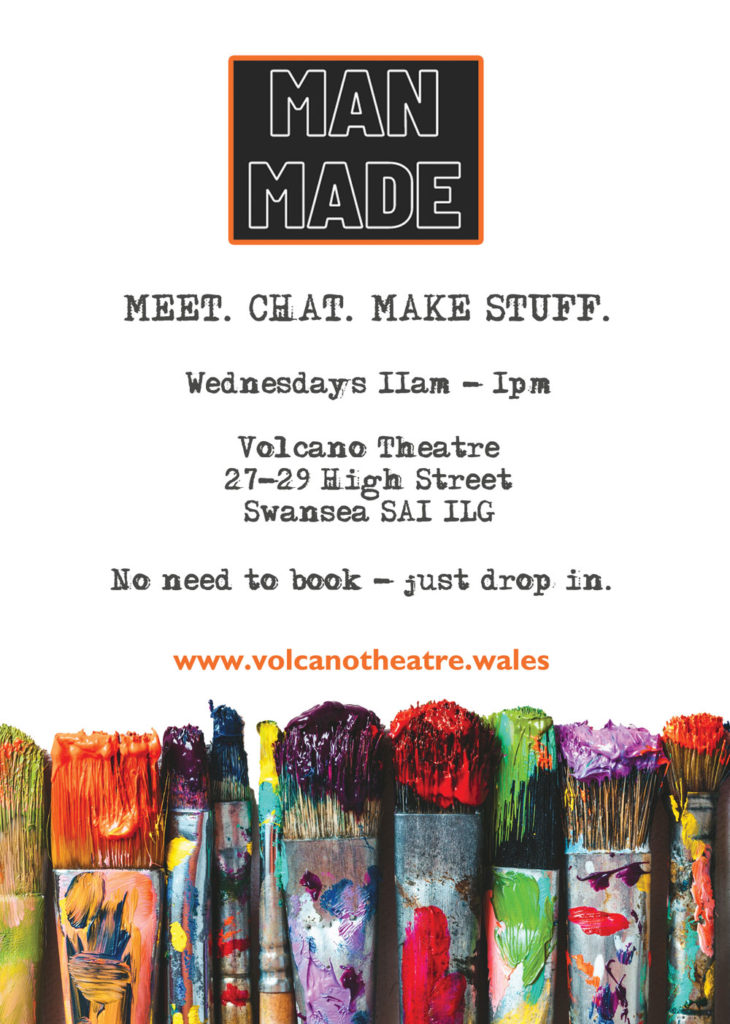 It’s hard to sum up Volcano in just a few lines. Billed as an “independent theatre company and community arts venue”, it’s been making waves in Wales since 1987, creating playful, inventive, risky and surprising work that tours internationally as well as being staged at the Volcano theatre on High Street in Swansea.

“Our home in Swansea is a huge disused supermarket where we create and perform our work and host and support performances, events and activities by other artists, organisations and community groups,” says Volcano’s Fundraiser & Project Coordinator Laura Webb.

“We are more than a theatre, more than a gallery, more than a building. We are rooted in our community and grow from there, reaching out across the country, Europe and the World. We are working to address inequality in our society and to understand and break down the barriers to creative, artistic activity for everyone, regardless of circumstance. We work collaboratively with our community. We create and perform theatre that is innovative, risky, surprising and different. We push the boundaries and explore possibilities…and impossibilities.”

Volcano has a broad reach: it works with local schools delivering creative projects based on movement and literacy, and with local community groups including Swansea Asylum Seekers, People Speak Up, and Swansea YMCA. It has a Volcano Community Network established this year to meet with other local organisations to explore possibilities for collaboration, and it hosts free family activities such as last summer’s Globetrotters experience and an Easter Craft Session this year.

Other regular events include exhibitions in the gallery space, performances, youth theatre and movement classes and rehearsals. It has a new Saturday group for ages 8-14 run by its literacy project Storyopolis, a free comic book workshop for ages 8-18, and a new youth project for ages 14-21 which will see a series of theatre-craft workshops take place over the summer.

Volcano is a collection centre for The Boot Room, collecting used sports boots for redistribution in addition to running a series of community projects, of which Man Made is the latest addition. Man Made is a men’s wellbeing project that got off the ground with £962.30 from the South West Wales Connected Community Changemakers Fund.

Laura explains how it all began:

“Following our first Volcano Community Network meeting at the theatre in January this year, we identified a need for an open, creative and social group for men locally,” she says. “Whilst there are several ‘Men’s Shed’ – type groups running and walking groups, there was a gap in provision of a social and creative space in the city centre for men. In consultation with Phil Swinnerton, the facilitator and coordinator of a local men’s wellbeing and walking group, we decided to apply for Changemakers funding to fund the purchase of a range of art materials on the understanding that Volcano would provide a space for a creative men’s wellbeing group to run in a weekly basis.”

The funding was used to purchase a range of high-quality art materials including paint, canvases, sketchbooks, pastels and clay. At each session these materials have been available for participants to choose what they would like to use, with no restriction or instruction.

“This funding has made it possible for us to provide a safe and welcoming space for those in our community who may be feeling isolated,” says Laura. “It is an investment in the wellbeing of the men who attend. It has created friendships within the group but also within the wider community with organisations supporting men reaching out and meeting with us to talk about how they can get involved.

“We recently held an end of project event which was attended by participants, local area coordinators, representatives from another men’s mental health support group, the Wallich and a local independent radio station amongst others. It has increased our visibility as a community arts venue and hub and opened up the conversation into how we can continue and expand upon the project. It has been a springboard and we are excited to see how the project develops.”

This year has been busy already with a series of new and exciting performances at Volcano, Storyopolis projects launching in local secondary schools, Man Made, the Easter Family Craft Workshop, and Volcano original productions Sincere as Objects and, from its youth theatre, Loaded. There’s plenty more to come, too:

“Keep an eye on our website for upcoming performances and projects including our youth panel project ‘Notes from the Underground’, the launch of our Storyopolis literacy project Saturday Club and the continuation and development of our Man Made project,” says Laura.