If you’ve visited Swansea Station lately, you’ll almost certainly have noticed the improved station forecourt, which has been enhanced with new benches and planters in a project led by renowned Swansea artist Owen Griffiths.

Now visitors to the station can take time to sit and enjoy the colourful surroundings – which are also helping to support bugs and insects and to educate people about sustainability.

Owen Griffiths is well known for his community and garden projects in Swansea. These include Vetch Veg, in which the former Swansea football ground, the Vetch Field, was transformed into an urban garden; the GRAFT Courtyard Garden Project at the National Waterfront Museum; and most recently the Thinking Green exhibition and gardening project at the Glynn Vivian Gallery in Swansea.

We asked him to improve the approach to the station after a Shared Vision we held with our host 4theRegion, a membership alliance working to bring about positive change in Swansea, Neath Port Talbot, Carmarthenshire and Pembrokeshire.

At the meeting, local businesses, organisations and members of the public discussed the need to enhance the station to create a sense of pride and welcome. The result was the station planters project, which has been funded by the Transport for Wales Biodiversity Fund and Swansea Council’s Local Places for Nature Funding. In total, £38,000 was made available. 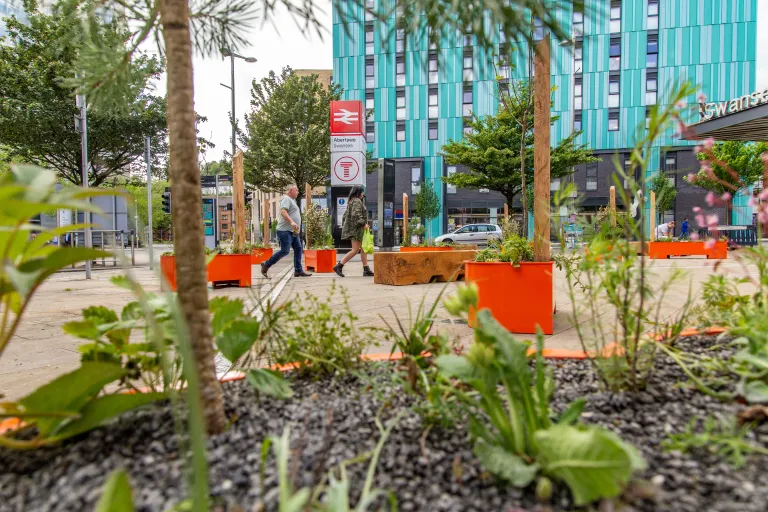 Impressed by the success and impact of Owen’s other local projects, we invited him to create a more attractive approach to Swansea Station and true to form, he has built sustainability into every aspect of the work.

Rather than sourcing topsoil, the extraction of which can cause damage to the environment, he filled the planters with substrates from local, sustainable sources – cockle shells, oyster shells, sand, building rubble and limestone.

Owen brought in the expertise of Owen Hayman, a horticultural designer currently training at RHS Wisley, and John Little, a green Infrastructure and landscape designer based in Essex who has been leading and developing horticultural designs in different industrial substrates.

“We wanted to explore different ways of using waste materials,” said Owen. “It shows what you can source locally, which connects to the local geology and be utilised in a biodiversity context.”

The design and materials of the planters is significant too. Angharad Pearce Jones, a blacksmith from Ammanford, made the planters to Owen’s design, which is based on the architecture around the area – the brick detailing on pre- and post-war architecture in and around the square mile of the station, including the concrete relief on the old medical centre on Orchard Street.

Owen and his team of volunteers filled the 10 planters with plants that reflect the local ecology and encourage biodiversity; bee habitats have been built into them, along with wooden posts with holes for beetles and bugs. The plants include local coastal species, yuccas, pine trees, fig trees, wild strawberries and the same roses that grow at Three Cliffs Bay. 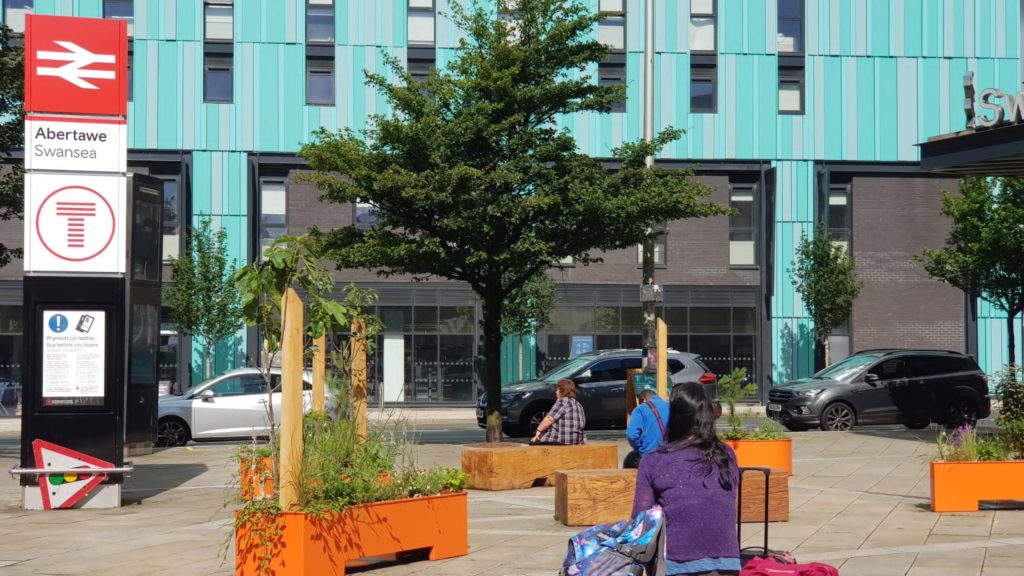 The oak benches Local artist Amy Marsden and like the planters, they can be moved into different positions and arrangement to accommodate different levels of footfall at the station.

The result is a meaningful enhancement to the station that educates, helps the environment, and tells a story about the surrounding area.

“The idea is that it connects to different kind of landscapes of Swansea and also demonstrates ways of working that don’t require masses of topsoil to be moved,” says Owen. “It shows what you can do with a fairly small budget to make a big visual impact and have quite a big impact in terms of biodiversity.”