What’s it like being a conductor on our rail network? 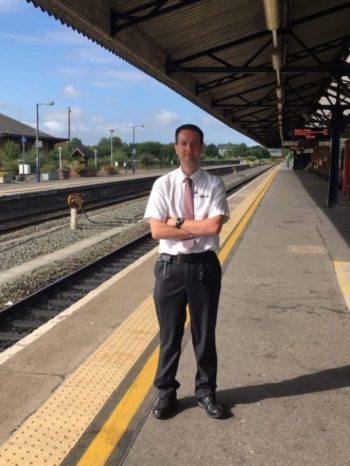 No two days are alike for train conductor Michael Gannon. Working varied shifts, his job takes him rich across the South West Wales rail network, from Cardiff to Milford Haven, Pembroke and Fishguard.

Michael, 40, lives in Neath and is based out of Carmarthen station so he travels there by car each day to start work. While the public’s perception of a train conductor is that they check tickets, this is only one part of a job that carries a lot of responsibility.

“The job also covers revenue, performance and customer service, but we’re primarily looking out for the safety of passengers on the train and on the platform as the train is coming in and leaving,” he says.

Conductors need to have a vast amount of knowledge regarding what to do if a problem or emergency occurs. They must also excel at timekeeping because the railway is fined for every minute a train is delayed.

“We’ve got to try and keep things moving, and the customer service side is very important – knowing connection times and walking through the train answering questions as well as checking tickets,” he says.

Michael trained for nearly four months to qualify as a conductor. He’s been in the job for eight years; he was previously an NVQ assessor but was looking for a change.

“I was looking at a recruitment site and the job came up, so I went for it. It’s the best thing I’ve ever done,” he says. “The main thing I enjoy is the variety and the different groups of passengers – it keeps you on your toes. A Monday morning commuter train is a completely different experience to a Six Nations train on a Saturday afternoon. We also do the Heart of Wales line towards Llandeilo, which is full of tourists, as are that trains to Pembroke Dock and Tenby in the summer – they can be heaving with people, always keen to have a chat. It’s fun.”

There are challenges, however – particularly the lively atmosphere of Friday and Saturday night trains, and the varying shift patterns, which can see him working a week of 3am starts followed by a week of shifts that end at 2am.

“Your body clock is always all over the place – that’s the hardest bit, especially having young kids, but you get used to it,” he says.
Despite the shift patterns, he would recommend the job to others.

“You’ve got to be able to get your head around the shift work and you need to be a people person – you have to get amongst the passengers and speak to people, be enthusiastic and friendly and promote the railway. If that’s you, I can’t recommend it enough.”