If you visit Swansea, Carmarthen or Narberth by train, you now have the opportunity to trace the stories of some of these towns’ most remarkable women, by following self-guided walks created by Women’s Archive Wales.

If you’d like to know more about the fascinating stories of the “Bad girls of Swansea”, Carmarthen palaeontologist Dorothea Bate, or Narberth journalist and adventurer May George, now is your chance.

The new series of Women’s Heritage Walks booklets covers a total of 12 different cities and towns around Wales, highlighting over 120 interesting and notable women or groups of women. While the number of the walks in towns on our rail network currently stands at three, booklets for additional towns are in the pipeline.
The project came about after The Swansea Women’s History Group organised a heritage walk around the city about six years ago; then, during the celebrations of the centenary of women winning the right to vote in 2018, Women’s Archive Wales devised a similar walk around Aberystwyth as part of its Century of Hope/Canrif Gobaith project.

“Both had proved very popular and when the pandemic struck in 2020, revisiting this idea and extending it to other towns and cities in Wales appealed to the members and was a way of involving many more in planning, researching and writing up the walks,” says Catrin Stevens, the project coordinator and former chair of Women’s Archive Wales.

“Committee members and others responded with enthusiasm and the idea mushroomed from two walks to the twelve we will be launching on April 28,” she adds.
The walks were written by local Women’s Archive Wales members based on their knowledge of their areas.

“We felt that it was important that local members wrote about their own areas and felt ownership of their own walks, but that the whole project would be on a similar format and made accessible to all who were interested in the history,” says Catrin.

The aim of Women’s Archive Wales is to raise the profile of women in Welsh history, and these walks are a way of achieving that.

“Women’s history has been neglected and ignored for centuries,” says Catrin. “We have succeeded in discovering/rediscovering the histories of around 120 women – some already quite well-known, others less so, others totally forgotten. All deserve to be commemorated, however.”

Here are some of the women you could learn about Swansea, Carmarthen and Narberth:

Annie Webb was born on February 9, 1857 in Monmouth. Little is known of her early life, but by 1905, she was living in Narberth. Described during her lifetime as “plucky”, Annie built her own home at Peterslake, Narberth, from “her own concrete bricks (made) with sand and gravel from a nearby stream…” A newspaper cutting from 1927 reveals: “The concrete blocks weigh over half a hundredweight and Mrs Webb keeps to herself the secret of how she has been able to make them so perfectly.”

Clearly a self-motivated and independent character, Annie was also reported to regularly walk ten miles to Tenby, pushing a “perambulator all the way, loaded up with butter, eggs and vegetables” before “walk(ing) back to Narberth after selling her wares”. This was when she was 70 years old.

Rachel Barrett was born in 1874, the daughter of “welsh, Welsh-speaking parents”. She won a scholarship to Aberystwyth University where she gained a BSc in mathematics and science. Having taught in Carmarthen, she moved to Penarth County School and became involved with the suffrage movement, helping Adela Pankhurst in Cardiff. She then moved to London and was a prolific public speaker and co-editor of The Suffragette magazine. She was also a photographer, taking many of the most famous pictures of suffragettes. In 1913 Rachel was arrested and charged with conspiracy. She was sentenced to 9 months in prison and was incarcerated in Holloway and Canterbury prisons. There she became a hunger and thirst striker. After WW1 She continued to campaign for women’s rights and died in Sussex in 1953.

From the Carmarthen walk by Dr Mary Thorley 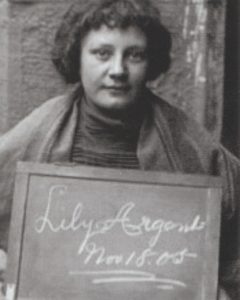 One of Swansea’s Bad Girls.

Swansea’s “Bad Girls” were drunks, thieves, prostitutes, daughters, wives, mothers; predominantly women from a social background of drink, violence, and abuse. Often turned out onto the streets at 14 years old and having to fend for themselves with little or no education, skills or opportunities, many of them earned a following in the newspapers for their character and exploits. One such was Mary Norman, a wife and mother who earned the soubriquet of “Lady Tichborne” and was treated with affection by the justices, newspapers and the workhouse master. “Mad Maggie Rogers” was similarly respected despite her record for drink, as was Ellen Sweeney, notorious for her drinking habits, who had poems and articles written about her after her death. The Sullivan sisters were renowned for drink and violence, as were the Murphy sisters. They all struggled for survival.

Each woman’s story has pathos. The streets were their domain. Each served time in Swansea Prison.
– Elizabeth Belcham, author of the Swansea walk