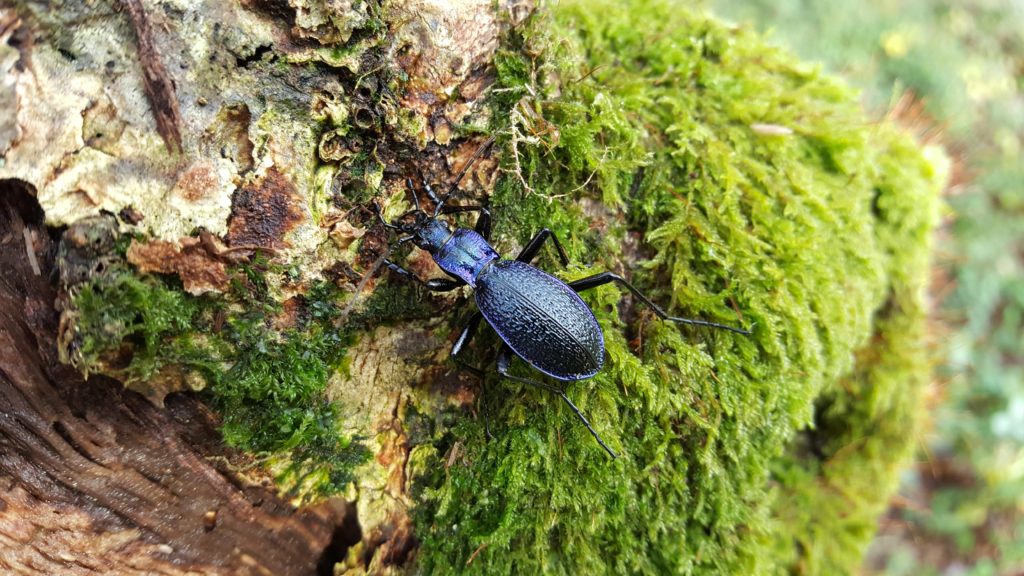 The towns and villages served by our rail network have some beautiful natural environments, including several very special habitats that are home to incredibly rare plants and creatures. One of these is Coed Maesmelin in Skewen, an area owned and managed by The Woodland Trust. Back in April 2012, a chance discovery by a local man led to the endangered blue ground beetle being discovered in these woods.

Prior to this discovery, the globally threatened species was vanishingly rare in the UK: it was known to inhabit just a handful of ancient oak and beech woodlands in Cornwall and Devon. Its discovery in Skewen is therefore significant – and it’s the very first time it had been recorded in Wales.

It all began in a garage in Skewen, where a local man found an unusual looking beetle in his woodpile. It sparked his curiosity, so he got in touch with Buglife, the Invertebrate Conservation Trust, to see what they made of it.

“It’s remarkable that he found it, and that he got in touch with us,” says Clare Dinham, Wales manager for Buglife. “Many people would not have thought to give us a call.”

Buglife promptly sent someone to the area to hunt for the beetle. They were unsuccessful, but then The Woodland Trust stepped in and commissioned two larger surveys, resulting in the discovery of a population of blue ground beetles in Coed Maesmelin.

The discovery enabled Buglife to get lottery funding for its 18-month long Blue Ground Beetle Project, which finished last year. With the help of local volunteers, surveys were conducted across 10 woodlands in the Neath Valley, and a total of 41 adult beetles and 2 larvae were discovered.

Excitingly, the blue ground beetle was found at four new locations, all within half a mile of Coed Maesmelin, confirming it as a Skewen/Bryncoch speciality. Daytime searches were also conducted with volunteers in January and February 2020, discovering as many as 20 beetles over-wintering in dead wood and drystone walls around Skewen.

The project also delivered targeted habitat management work at Coed Maesmelin and other woodlands to control bramble scrub and create more a favourable habitat for the beetles; it is hoped that this work will allow its population to increase.

The blue ground beetle is a striking and fascinating creature with a vivid blue sheen to its body and an impressive set of jaws. In South Wales, it’s largely found on oaks, but has also been seen on beech and older silver birch. It loves to eat slugs, and will follow their trails up tree trunks to find a snack.

“There are two species of slug that they find pretty delicious,” says Clare. “That wander up trees, following the slug’s trail, and then they latch onto the slug with their massive jaws. The slugs are often three or four times bigger than the beetle, which will then secrete juices that digest the slug while it’s still alive. Interestingly, their larvae do exactly the same thing – they are quite voracious predators, and they go about hunting in the same way. As well as slugs, they will sometimes take caterpillars.”

Although the Blue Ground Beetle Project has finished, people can still visit the woods at Coed Maesmelin and explore the blue ground beetle-themed walking trail that has been created there. Meanwhile, Buglife has provided some dead blue ground beetle specimens to Exeter University for DNA analysis that will compare the populations in the southwest of England with those found in South Wales.

Buglife also hopes to do further surveys in South Wales in the future. In the meantime, don’t go disturbing the beetles’ habitats, but do keep your eyes peeled for dead specimens – and if you find one, send it to Buglife!