Discover the wildlife of Burry Port

If you travel from Llanelli to Burry Port by rail, you’ll pass through a remarkable wildlife habitat that was created as a result of decommissioning the nearby Carmarthen Bay Power Station in the 1980s. As part of this process, pulverised ash was deliberately dumped on the surrounding land, creating a marshy, fenland habitat now frequented by graceful egrets (white herons), colourful shelducks and brent geese – migratory visitors that spend their summers in the Arctic.

Get off the train at Burry Port and walk towards the harbour, and you’ll be able to explore an area that is hugely popular with bird watchers due to the sheer variety of species you can see there. 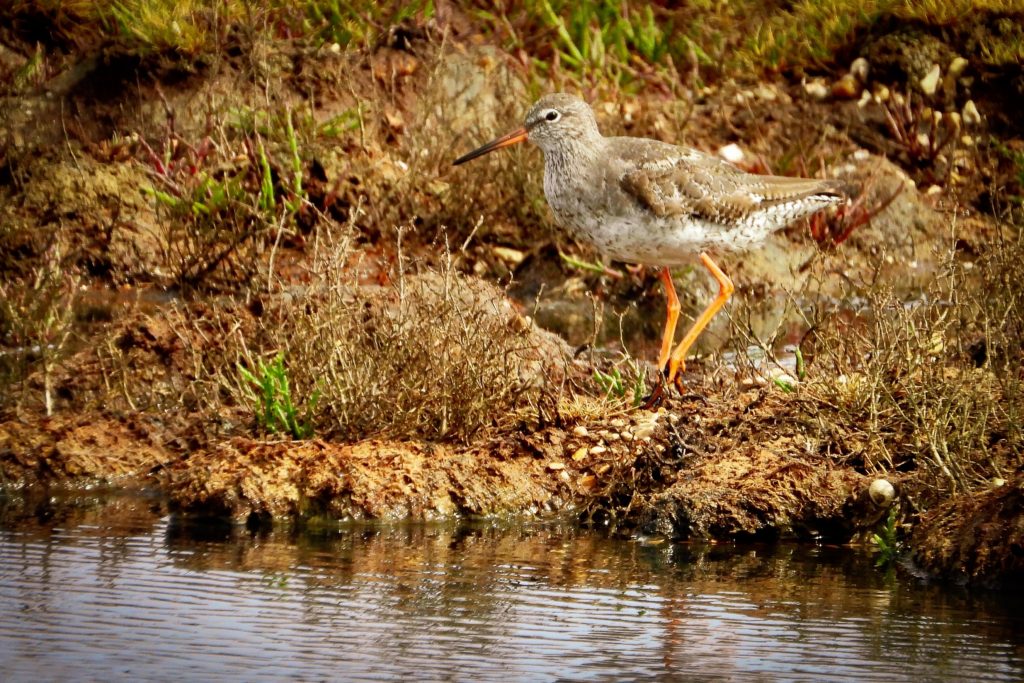 Redshank standing by the water. Photography by Nick Fewings.

“It’s about three quarters of a mile to the inner harbour, where, when the tide is out, you can see redshank and occasionally curlews feeding in the mud,” says Paul Aubrey, education officer for Carmarthenshire Council’s Outdoor Recreation Service. Redshank are a type of wader, named after their distinctive bright red legs, and curlews are easily identified by their curved beaks.

“In the winter there are teal and mallard there are well, and gulls resting when the tide is out: black headed gulls, herring gulls, black back gulls and common gulls,” adds Paul.

If you walk to the end of the harbour you can see more seabirds, particularly at high tide.

“Bring binoculars and you can spot gannets and common scoter,” says Paul. “The Burry inlet and Carmarthen Bay are important areas for the common scoter in winter, when there can be as many as 30,000 of them in Carmarthen Bay.” Common scoter are large, dark-coloured sea ducks that can often be seen bobbing like rafts in the water. They dive in the sea for crustaceans and molluscs, and also eat aquatic insects and small fish when they’re in fresh water.

“Great crested grebe can be seen from the harbour, mainly in the winter and autumn, and the great northern diver, an Arctic species, winters there,” adds Paul. In addition, you can see small waders closer to land, particularly ringed plovers on the beach and turnstones at the end of the harbour walls.

If you have an hour or two to spare, you can turn your exploration into a circular walk, picking up the Wales Coastal Path as it passes along the side of the Pembrey Burrows, a nature reserve comprised of dunes overlooking the salt marshes.

“Here you could see red shank, green shank, ringed plover and lots of gulls,” says Paul. “During August you will particularly see sandwich terns and Mediterranean gulls. As always, these sites are much better on a rising tide because the tide pushes all the birds into that area. There can be 4000 oyster catchers on the sand just near Pembrey Harbour. The Burry Inlet is important for them because they feed on the cockles and mussels that are so plentiful there.”

At the right time of year, you’ll also see some beautiful wildflowers, including bright yellow evening primrose, purple flowering green-winged orchids and autumn hawkbits, which look similar to dandelions and flower in spring and summer, despite their name.

“It’s a beautiful walk that gets you out in the countryside right by the coast,” says Paul. “To make a loop of the walk, you can come back along the canal, where there are blackbirds, robins and dunnocks, and – if you are really lucky – you may hear the plop of the water vole. Llanelli is a really important area for them.”

To read more about water voles, read our previous nature post – and if your visit inspires you to get more involved with these beautiful natural habitats, you can contact Paul on the email address below. Once the Covid-19 pandemic is over, the Junior Rangers Club will start up again at Pembrey Country Park, and there are also other community groups, such as litter picking groups, that you can get involved in.