News
A recent meeting organised by 4theRegion in association with South West Wales Connected in Haverfordwest highlighted the exciting opportunity for the town council to adopt the railway station. We outline what this could mean for the community and for visitors to the town.

Haverfordwest Town Council has expressed an interest in adopting the town’s railway station – a move that could massively improve the station’s appearance, facilities and links with the local community.

The prospect was discussed this month at a Haverfordwest Shared Vision Meeting organised by South West Wales Connected Community Rail Partnership and 4theRegion, a membership alliance working to bring about positive change in Swansea, Neath Port Talbot, Carmarthenshire and Pembrokeshire.

The meeting was attended by key stakeholders from the Haverfordwest community and aimed to establish the priorities for the town and its railway station. Ideas included the potential for better accessibility to public transport and improved signposting from the station to the shops. Other suggestions included adapting disused space for community projects and ‘greening’ the area while creating niche activities connected with this.

There was plenty of good news in the meeting. Rachel Moxey, Head of Economic Development and Regeneration, Pembrokeshire County Council, reported that The Riverside Library, Gallery and Information Centre has increased footfall in the town to 30,000 people.

The second phase of work will be the Western Quayside Enhancement, which will include the redevelopment of the space into a food emporium at an estimated cost of £6.5m. Work is expected to begin in December.

Redevelopment of Haverfordwest Castle is also on the cards, she reported. Funding is in place for development work, and an outdoor arena in the castle space is envisioned. There are also small grants to improve Castle Square on a practical level, by adding better lighting and electricity.

Stella Hooper of Haverfordwest Town Council highlighted further plans to improve the town, including an exhibition focused on the town’s heritage, and the redevelopment of a former rubbish dump into a wildlife meadow.

Gitti Coats from Haverhub, a community centre and social enterprise focused on rekindling the town, reported that Haverhub is currently growing its volunteer team, and is keen to establish a dialogue with other projects in the area. 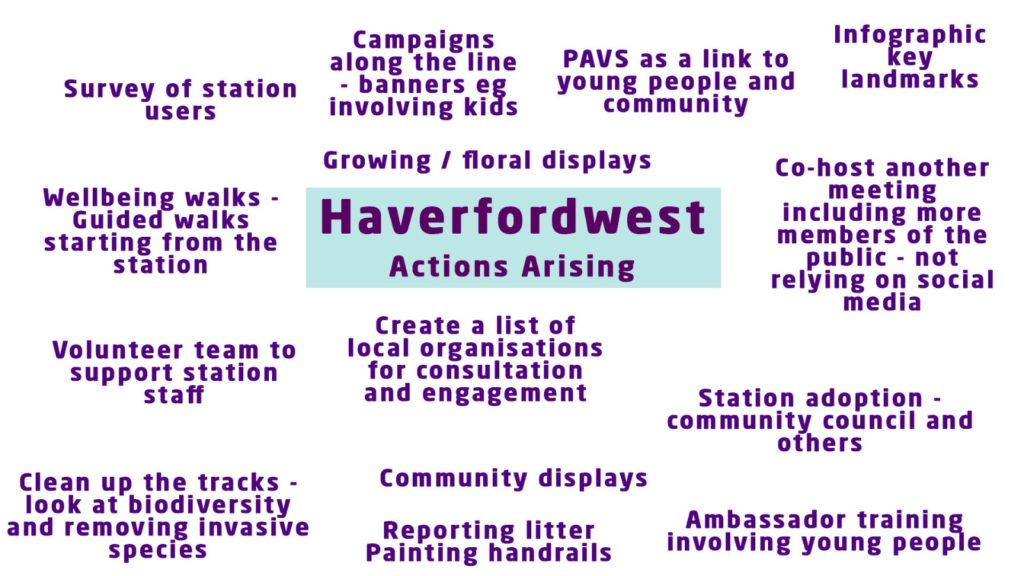 Further discussions raised other important points, including the potential to promote nightlife in Haverfordwest, to create destination markets, and to make better use of the area along the river.

Suggestions focused around the railway station included the need to make the station feel safer with better lighting, and the potential to create and promote wellbeing walks to coincide with train arrival times. Attendees also suggested that a community activities board at the station could provide valuable information about activities in the town.

Jennifer Barfoot of South West Wales Connected said: “We’re delighted with the constructive and inspiring suggestions that came out of the meeting, and now have a further meeting arranged with Haverfordwest Town Council. I feel confident that many of the ideas raised in the meeting could be addressed by adoption of the station by the town council. I hope to be able to announce further progress on this soon.”

Would you like to get involved in adopting Haverfordwest Railway Station? Express your interest by emailing jennifer@southwestwales.co